Mount Adams, known as Pahto or Klickitat to native tribes, is one of the five Cascade volcanos in Washington.  It is also the second highest peak in Washington at 12,281 feet elevation (only lower than Mount Rainier).  I joined up with a Mountaineers scramble trip, led by Chris and including group members Stephen and Andrew, to complete the Mount Adams South Spur summit route as an overnight on August 13-14, 2021.  ​​Reaching the top of Mount Adams makes for my new personal high elevation and my second volcano summit!

This trip was a special one for me.  A few days earlier in the week marked my two year anniversary since moving to Seattle.  Quite by accident this trip date aligned and now I get to say I summited Mount Adams in celebration!  Two years ago I would have never dreamed of the experiences and passions that I have now found in the Pacific Northwest.  I moved here for a job and in search of new personal opportunities, but I had no idea that I would find "my best life" in the process.  My outdoors skills have come a long way in that short period of time too.  I feel such gratitude - every single day.

​The Mount Adams South Spur is a non-technical route to the summit.  Meaning you can climb the mountain by simply using good snow and rock scrambling technique.  Since I have climbed Mount St. Helens, both the Summer Route and the Winter Route, Mount Adams was the next logical progression of Washington volcano summits.  Mount St. Helens and Mount Adams offer the only two non-technical summits of Washington's volcanos though.  To summit the three other neighboring volcanos - Glacier, Baker, and Rainier - technical mountaineering skills are required.

South Climb Trailhead to Lunch Counter: 4.65 Miles, +3,742 Elevation Gain, -24 Elevation Loss
On Friday I took the day off work and made the four hour drive from Seattle to the Mount Adams Ranger Station in Trout Lake.  Our group met up at noon and carpooled the remaining 40 minute drive up the Forest Service road to the Mount Adams South Climb Trailhead.  It is every bit of a five hour journey from the Seattle area to the trailhead to even begin the climb.  The drive is mostly two-lane backroads and a couple of unpaved Forest Service roads, which all just take time.  The Mount Adams Wilderness is very remote!

We were worried about wildfire smoke which had moved into the area a day before the trip.  The haze in the atmosphere was thick and we had no views of the mountain as we drove up to the trailhead and started out on the climb.  Fortunately, it never smelled like smoke and we climbed above most of the haze as we went up the mountain that afternoon.  The route starts out with two miles of gradual trail, through a forest burn zone, to reach Morrison Creek.  From the creek, the climb starts in earnest as the terrain becomes rocky and the trail fades to a rougher boot path.  As could be expected, the boot path disappears, reappears, and multiplies into many paths at various points up the mountain.  GPS maps and navigation experience both came in handy, but the route you take up will likely not be your exact route back down!
After hiking about a mile up the rocky ridgeline we finally hit a first snowfield.  The snowfield was not steep and we made good time on the final mile into our planned camp area for the evening, Lunch Counter.  The first decent views of Mount Adams appeared and the sky began to look more blue as we ascended above the haze.  At the end of the snowfield we climbed up a few hundred more feet of rocks, gaining a bird's eye view of the entire Lunch Counter camp area.  Now to pick out a camp site...
Lunch Counter, at 9,300 feet elevation, is the common camp location for those completing the Mount Adams South Spur route as an overnight trip.  The area is sprawling and relatively flat with many windbreaks for campsites scattered throughout.  The windbreaks are stacks of rocks, built in a horseshoe shape and about as tall as a tent, to provide campsite shelter from the wind.  We noticed a strong flowing stream ​coming off a gulley on one side of the area, so we headed in that direction to search for a campsite.  We easily found a prime location just above the gulley and only a few feet down to the stream.  We managed to fit our two tents and two bivy sacks into the one windbreak!

​We ate dinner and enjoyed views of the mountain while also eyeing our route for the following morning.  The haze on the horizon made for a beautiful, orange sunset.  We had an early call time the next day, so we all went to bed shortly after 8pm.  At some point in the night I woke up and realized the sky was clear and the stars were out in full force.  I spent a few minutes gazing at the stars (one perk of sleeping in a bivy) and I actually saw two meteors streak by, part of the Perseid meteor shower happening at the time.  I did not take any pictures, but I am including two night sky shots shared by my group member Stephen.

Lunch Counter to Summit to South Climb Trailhead: ​9.04 Miles, +3,123 Elevation Gain, -6,840 Elevation Loss
On Saturday morning our wake up call was 2:30 AM for our planned 3 AM alpine start to the summit.  An alpine start is common in mountaineering and simply means to start your climb in the early hours of the morning.  The benefits to an alpine start are 1) to allow for longer available daylight to complete your objective and 2) for safety reasons so that you can ascend the mountain before the heat of the day melts the snow or ice (underfoot or above you).

I failed to set my alarm and was startled awake by Chris calling my name shortly after 2:30 AM.  We were all up and at 'em quickly.  Leaving our camp fully set up, it did not take much time to put on boots and pack any last items in our day packs.  I forced myself to shove down a protein bar that I definitely did not want, but was needed for energy.  Under the light of our headlamps, we headed out from camp right at 3 AM and up towards the invisible mountain above us.  This was my first experience with an alpine start.  It was a really cool feeling to know that you were off in the dark to accomplish something big.  But it was also slightly intimidating to be climbing up a mountain that you could not see beyond the three feet in front of you.

From camp we walked a short distance before accessing a tongue of the snowfield to begin the first phase of our summit ascent.  We stopped to gear up with our ice axe, crampons, and helmet.  Heading up the snowfield, Chris had the tough job of navigating in the dark plus kicking all the steps in the snow.  There was only one set of headlamp lights moving up above us.  The longer we climbed more and more headlamp lights appeared below, following us up the mountain.  Around 5 AM the first light began to creep in and the sky entered the "blue hour" or the short time period just before the sun rises above the horizon.  About this time we reached the end of the snowfield and stopped for a quick break to put away our crampons and ice axe.
After exiting the snowfield, we continued climbing up a rocky and scree-filled slope.  The sun began to appear on the horizon above the slope of the mountain.  It is truly an amazing experience to witness the sunrise mid-climb, at 11,000 feet elevation, on the side of a mountain.  Mount St. Helens and Mount Hood also appeared on the horizon, popping out of the haze and cloud cover surrounding them.​
Once ascending the rocky, scree section of the route we arrived at the false summit, Piker's Peak.  The views looking across the top of the volcano looked like something from another planet.  The Mount Adams summit was on display directly in front of us now.  The path led us around the eastern flank of the mountain rim and across a small section of the icefield covering the middle of the volcano.
We were at the final push to the summit now!  The only thing remaining was about 600 more vertical feet up another sandy, scree-covered slope to the summit!
Mount Adams Summit - 12,281 feet elevation!  On the summit there is an abandoned shack, originally used as a Forest Service lookout and later as an attempted sulfur mine.  Many people report smelling sulfur at the summit (and some feeling sick from the affects and/or the altitude).  I personally did not smell anything, perhaps because it was incredibly windy!  There were a few wind gusts that almost made my balance wobble.  Also, I never felt any ill affects from the altitude at any point during the trip.

Unfortunately, the wildfire smoke significantly limited our summit views on the horizon.  We still caught hazy glimpses of Mount Rainier, Mount St. Helens, and Mount Hood in the distance.  While the smoke was noticeably present, the snow was noticeably absent.  Given the extreme heat this summer, there were very few snowfields left on our entire route and the summit block was entirely snow free.  An eye opening experience to see these two climate impacts firsthand during one climb up the mountain.
After spending about 45 minutes on the summit we were getting cold and windswept, so it was time to begin the descent.  Knowing the route now, we made a pretty efficient and uneventful descent back around the volcano rim and down through the rocky portion of the route below Piker's Peak.  Reaching the snowfield again we opted to test out a glissade chute for a short distance down the mountain.  We quickly learned that the glissade shoot was very icy, not well intact, and running down the steep slope towards rock.  Ultimately, we decided against glissading any further and descended the remainder of the snowfield on foot.  It was cool to look down the snowfield in the daylight to review the route we had come up earlier that morning in the darkness.  Back at our campsite at Lunch Counter we took a break for, well, lunch.  We packed up and began the last leg our our trip, a long descent back to the South Climb Trailhead.
As we drove away from Mount Adams we finally got to see the full view of the mountain, which was covered in smoke on our arrival the day before.  The summit is the lighter colored section in the center and back of the mountain.  For reference, I have drawn a very rough line to illustrate the South Spur route from Lunch Counter up to the summit.
Great trip!  I checked off a few new personal experiences: an alpine start, my highest elevation point, and my second volcano summit!  Plus the trip was a great opportunity to continue to refine my snow and rock scrambling skills.  Any time out in the mountains is a good time and I am especially thankful for how far I have come in the last two years.  Big thanks to our leader, Chris, and the Mountaineers organization for making it happen!

View the below map with our actual route tracked via my GPS watch.  Our start/end point is at the bottom of the map at the South Climb Trailhead.  Note: the Red line largely overlaps the Blue line on the same route. 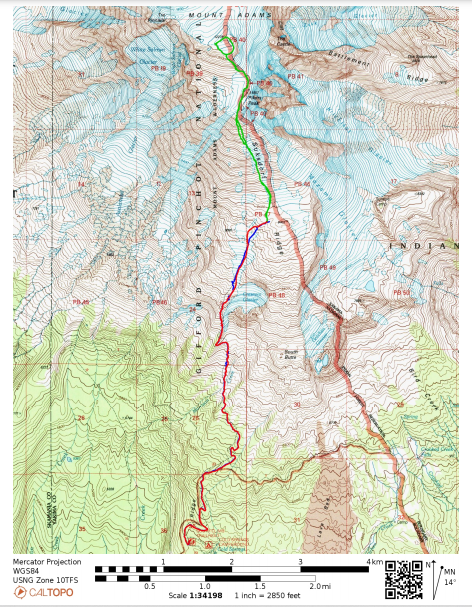