This day was an adventure I won't soon forget!  It was all snow from the trailhead for 6 miles and 5,600 feet of elevation gain to reach the crater rim.  I used mountaineering boots, gaiters, and micro spikes to start out.  Then geared up with crampons, ice axe, and helmet as the terrain got steeper.  The climb pushed my mental and physical fortitude, but gave great confidence (and experience) for my new found snow travel skills.  Even just a few months ago I wouldn't have imagined doing this trip.  It is amazing what opportunities open up with the right equipment, proper training, and a little experience. 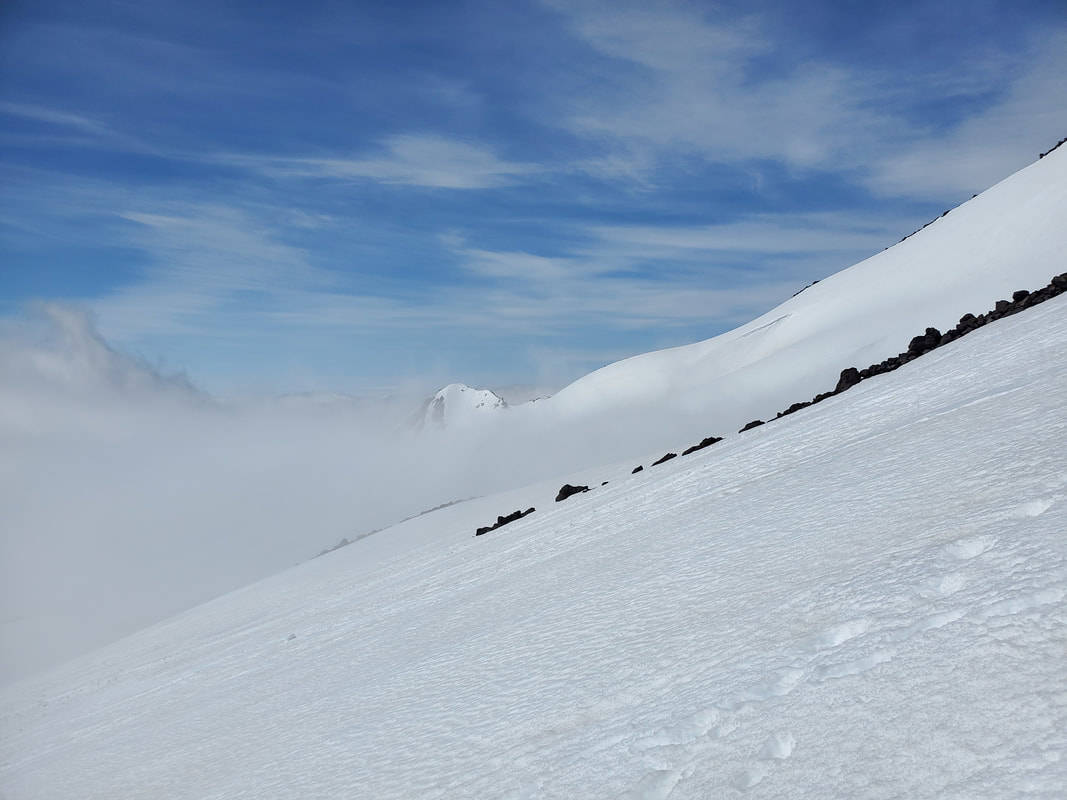 From the winter route trailhead at Marble Mountain Sno-Park the first roughly two miles follows a ski trail through the forest.  The ski trail eventually emerges above the alpine, near Chocolate Falls, and the real snow scramble begins.  Coming out of the forest, the clouds were thick.  I used Gaia GPS to track my route, but route finding never became an issue.  Throughout the day there many other people around and the boot path in the snow was clear.  The terrain got steeper around 4,500 feet, so to prevent a fall (or mitigate impact) I geared up with my ice axe, crampons, and helmet.
I travelled up the mountain in pretty much "white out" conditions until about 6,000 feet (just past the weather station) where I finally saw blue sky!  When I got above the low lying clouds, the views began to open up and I was able to see Mount Adams and Mount Hood volcanoes on the horizon.  Above the clouds the 20 mile per hour wind gusts kicked in too, making each step upward seem even harder.  This section of the climb features multiple false summits that are encouraging, yet mentally challenging.  Climb up to a high point only to see another high point after.  I was so close to the crater rim now, but the progress forward seemed so slow.
It took me five hours of climbing to reach the crater rim.  I sat down on the snow (way back from the rim), ate a snack, rested for awhile, and enjoyed the few views I could get as the clouds came and went.

Based on my previous Mount St. Helens summer experience, I knew that the crater rim is very narrow.  Once you reach the top, there is not much room to move around.  In the winter the crater rim appears larger due to a snow cornice which builds up around the entire side of the precipice.  A cornice forms when the wind blows consistently in one direction causing snow to build up (and harden) over the edge of the actual ground underneath.  Cornices are extremely dangerous as it is not obvious where the land underneath ends and the snow overhang begins.  The cornice could break off at any time (especially in the warming spring temps).

​During this time of year there is no safe view down into the crater, you'd be too close to the edge for comfort with the cornice.  Add to that, clouds kept rolling in and out, obscuring most of my views anyway.  I lamented the fact that on both of my Mount St. Helens climbs now I've had little to no views (sigh).  I think Mount St. Helens is trying to remind me it's the journey, not the destination, that matters.
With the 20 mile per hour wind and temps in the 20s at the rim, I didn't sit around for long!  Time to get back down the mountain - by glissading!  I really think the best part of climbing a snow covered mountain is the ability to glissade back down it (when safe).  Glissading is simply sliding on your butt down a slope of snow (using proper technique and an ice axe for control/safety).  When many people glissade off a mountain a glissade chute forms.  I like to describe glissading and a glissade chute as a really fast, adult version of a children's slide!  I put on my waterproof pants and jacket to stay dry.  Then right on the volcano crater rim I jumped in the glissade chute and managed to ride for about 4,000 feet back down the mountain (various connecting chutes).  So much fun!  Plus a much easier and faster way down!  I had to pinch myself - I couldn't believe I had just taken a joy ride from the crater rim down the side of a volcano!  After glissading nearly back to the tree line, all that was left was the two mile walk along the ski trail back to the trailhead.  The return trip down the mountain took only a little over two hours.  All said, I returned to my car in just shy of eight hours (then promptly found the nearest burger and fries)! 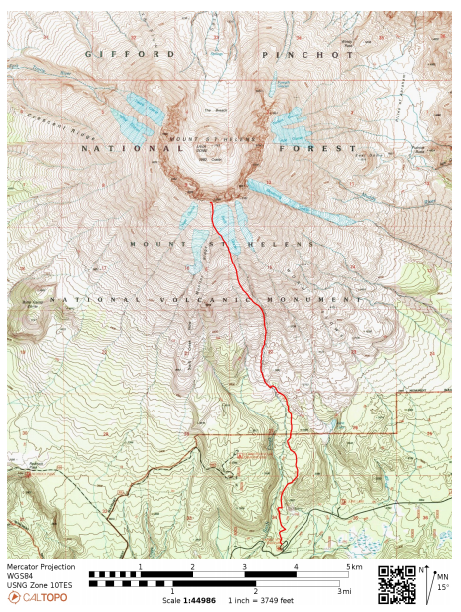