It's not every Tuesday that you take the day off work to climb an active volcano! Mount St. Helens famously erupted in 1980 (40th anniversary this year). It's stated as the most active in the Cascade range of volcanos which run through British Columbia, WA, OR, and northern CA (part of the larger Ring of Fire). When I learned that the Mount St. Helens summit was a non-technical climb I immediately said "sign me up"!

Summiting mountains is a hobby in the Pacific Northwest and I wanted to get a volcano summit under my belt.  With its relatively low elevation (8,363 feet) and non-technical climb, Mount St. Helens makes a challenging, yet attainable mountain summit. The climb goes UP through rock fields and ash (think all the stuff that blew out during the eruption). Summiting is do-able if you have mental fortitude, basic climbing skills, and physical fitness to hike/class 2 scramble ~5,000 feet elevation gain in 5 miles up the mountain side.

Clouds blocked much of the view on my summit day, but it didn't dampen my experience! I soaked in the moment, spending over an hour as the only person on top of the summit. Can you imagine sitting at the top of an active volcano by yourself at over 8,300 feet elevation?! Let me say...there is not much better than that!

The Mount St. Helens summit has two climbing routes: in the summer the Monitor Ridge route and in the winter the Worm Flows route.  Given I summited in September with still summer conditions, this trip report covers the Monitor Ridge route from Climbers Bivouac trailhead.  The Mount St. Helens summit climb can really be described in thirds.  The first third of the hike takes you through forest with gradual incline.  This section is a nice warm up to get your blood pumping before the real adventure starts.   After about two miles, you bust out of the forest into rocks and enter the second section of the hike.  From there you'll mix hiking with class 2 rock scrambling for the next roughly 2 miles and 2,500 vertical feet of elevation gain.  White poles serve as a guide to help you navigate through the rocks and an unofficial boot path is visible in most of this section.  While the rocks are tedious, this section is actually fun.  Take your time and make your own route.  Up, over, and around rocks...you really can't go wrong as long as you stay on the same ridgeline or spine of the mountain and head UP!  I had a lot of fun making my own route of least resistance up/down the mountain.
After what seems like an endless sea of rocks, the ground under foot suddenly transitions to ash.  The last third of the hike, roughly a mile and 1,000 feet more elevation gain, is steep and through thick ash (similar feeling to fine beach sand).  During this section of the hike you feel oh so close, yet oh so far!  You can see the summit ahead, but the progress is slow.  It is described as one step forward, two steps back.  I didn't find it quite that bad, but I did resort to counting 30 feet at a time with a pause in between each set.  I made it up to the rim in about 3.5 hours.
Reaching the rim of the volcano was kind of funny.  Two or three steps and there I was...but two or three steps more and you'd be over the other side.  There is not much room on the volcano rim.  Plenty of room to be safe, but not much more.  The clouds had rolled in so I found a spot to sit down, eat my snack, and wait in hopes the clouds passed over.  Over the next hour I had little to no view into the crater of the volcano and very little view into the distance either.  At cloud level, I was literally engulfed in white clouds rolling in and I had the place entirely to myself.  Definitely a moment that I will not soon forget - just me, the clouds, and the rim of a volcano!

During the 1980 eruption the mountain literally blew it's top off! What is left is the large rim/sides of the mountain. You can now see inside the crater to the lava dome, where the eruption would blow out. The lava dome has continued to grow every year from built up/pressure of the lava inside. Also, there are several vents that emit steam, which was cool to see in person! A large horseshoe glacier has formed around the lava dome and is now the fastest growing glacier in North America! As the clouds rolled through I eventually gained views of the 3 other neighboring volcanos on the horizon: Mount Hood to south, Mount Adams to east, and Mount Rainier to north.
I checked my watch and set myself a deadline that I had to leave to get back to Seattle (regardless if the clouds had cleared or not).  At the last minute the clouds parted enough to get some partial views into the crater.  I then made blazing time back down the mountain to the trailhead in 2.5 hours and back to Seattle by a little after dark.  The below video is from the last moments before I descended the mountain. 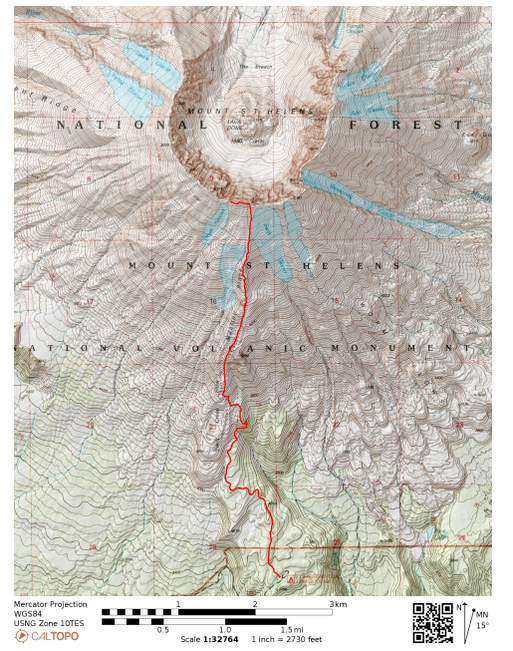