The Loowit Trail circumnavigates Mount St. Helens for roughly 28 miles (including approach trail) and provides a 360 degree perspective of the volcano that very recently erupted in 1980.  The Loowit Trail takes its name from the original native tribal name for the mountain, Louwala-Clough or Loowit, which means smoking mountain.  Over the 4th of July weekend I completed the trail in two days and one night.  I guess you can say I celebrated my 4th of July holiday with one of the biggest fireworks of all time!  For the very short version, check out the 360 degree views via my blog post 360 Degree Virtual Tour Around Mount St. Helens (Loowit).  For the full story, keep reading here!

I was intrigued to backpack the Loowit Trail because it is modern history.  In the Pacific Northwest there are plenty of volcanos and even other loop trails around a few of them too.  But there are none with such recent eruption history as Mount St. Helens.  How often do you get to walk across the blast zone where lava flow and rockslides decimated everything in its path just 41 years ago?  That is recent in terms of volcanic history which tends to speak in millions of years!  Mount St. Helens is still very much in the process of regeneration and I knew it would be a unique experience to observe the destruction and the recovery from all sides of the mountain.  Of course, Mount St. Helens remains an active volcano too!

The Loowit Trail is challenging terrain, as you can imagine that hiking on the side of a recent volcanic eruption would be.  Think: traveling over everything the eruption blew out or decimated in its path.  The trail is very hot and exposed with few remaining trees.  Based on the exposed terrain, there are few reliable water sources and the seasonal sources dry up quickly after the winter snow melt.  The ground underfoot is largely volcanic ash and sand which feels similar to walking on a beach.  There are deep gullies carved by lava and rockslides.  There are many fields of boulders which I can imagine were blown out of the volcano and deposited down the mountain.  Added to that terrain is scree (small, loose pieces of rock) and every other imaginable size rock that was created or displaced via the eruption or later erosion.

​The ash, sand, and scree make footing and route finding difficult at times.  Turns out...it can be hard to find a boot path in the ash/sand when it gets covered up by other ash/sand!  Some beginner route finding skills and appropriate maps or GPS apps are essential tools.  Also the ash, sand, and scree makes for loose footing and washed out (eroded) ridgelines.  It often feels like your foot shifts underneath you on the loose terrain, so hiking up and down steep gullies and along narrow ridgelines requires full attention.

I have climbed to the Mount St. Helens summit twice in the past year, via both the summer and winter route, but it was a different perspective this time to travel fully around the volcano.  What I found is that each side of the mountain has unique characteristics and surprises.  It was interesting to see how the terrain changes at different sides of the mountain based on how the eruption impacted it - the intensity of the blast and type of debris.  One thing is for sure, Mount St. Helens brings the scenery and the challenging terrain.  It just never quit coming and I was in awe for 360 degrees around the mountain.  I love when a trip pans out even better than expected!

I guess the Loowit Trail now completes the Mount St. Helens Trifecta: summer summit, winter summit, and 360 degree circumnavigation!  That is an accomplishment that I just invented, but pretty cool nonetheless!  Check out my trip reports from the Mount St. Helens Summer Route and Winter Route summits to read details on those two previous outings. 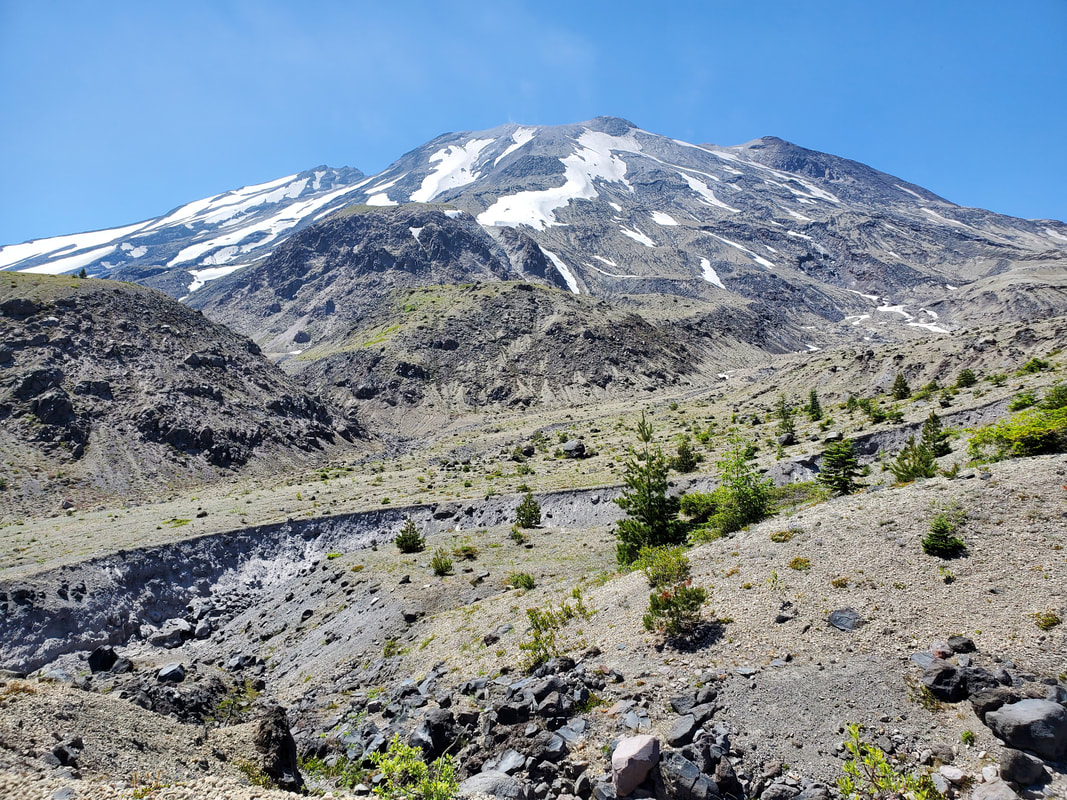 Day 1: June Lake Trailhead to the South Fork of the Toutle River

Counter Clockwise, ​16 Miles, +4,140 Elevation Gain, -3,753 Elevation Loss
There are a number of different trailheads that access the Mount St. Helens area from all sides of the volcano.  The Loowit Trail itself circumnavigates the mountain between roughly 3,500 to 5,000 feet of elevation.  For reference, the Mount St. Helens summit (post-eruption) is at an elevation of 8,363.  From any starting trailhead, you must ascend via an approach trail for about 1,000 feet of elevation up to join the Loowit Trail.  From there the 360 degree loop actually begins!  The entry point and direction of travel are two important considerations in route planning for the Loowit Trail.  It is worth researching the options to understand implications to your agenda (miles and elevation gain/loss per day) and trip logistics (water management and no camping within the blast zone).

Counter Clockwise, ​12 Miles, +2,953 Elevation Gain, -3,327 Elevation Loss
The next morning I continued counter clockwise from the Toutle River on my 360 degree loop, ultimately towards my car parked at the June Lake trailhead.  To climb out of the river valley the trail covers several miles of ascent through a (rare) forested section.  A few ridgelines and peekaboo views of the Mount St. Helens emerge again as you climb higher.  Almost on cue, the gullies then reappear!  Similar to the night before, there is another steep gully in this section with ropes installed to help with leverage climbing up and down the steep ash and sand slope.
Heading around the southwest side of the mountain the landscape surprised me again.  The terrain opened up into a relatively flat alpine tundra.  This stretch made for some well deserved easier walking.  There are plenty of beautiful views of Mount St. Helens and layers of blue mountains visible along the horizon (including Mount Hood further to the south).
Then the terrain added in rocks, rocks, and more rocks!  This section of the trail featured long stretches of boulder hopping and class two scrambling (using both hands and feet).  While no real trail exists across the boulder fields, white posts are interspersed across the route to help keep you on track.  Terrain-wise, this section is most similar to the experience of summitting Mount St. Helens via the summer Monitor Ridge climber's route.  In fact, I felt relatively familiar with this part of the Loowit Trail from my prior experience on both the summer and winter climber's routes to the summit.  During this section,  the Loowit Trail crosses over the summer climbing route near Swift Creek and then also crosses over the winter climbing route near Chocolate Falls.  It was interesting to look back on both prior climbing routes with a new perspective from the Loowit Trail this time.
The Loowit Trail continues to descend past the climber's routes and eventually drops below tree line again.  I connected back to the June Lake trail for a short two miles return to the car to successfully complete the trip!

View the below map with my actual route tracked on my GPS watch.  My start/end point is at the bottom of the map via June Lake access trail. 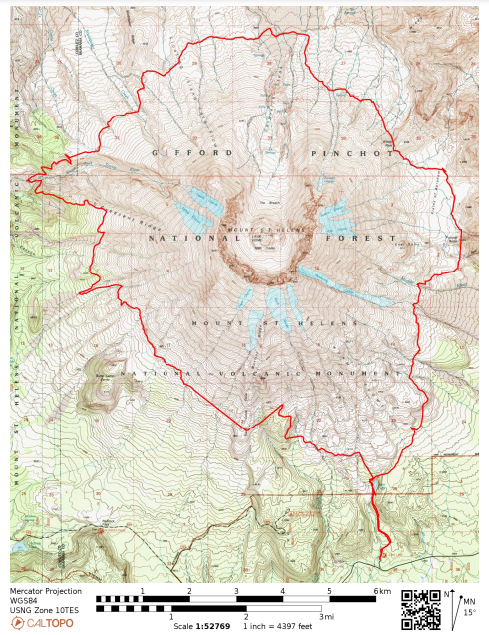