​This is the story of my second trip to Canada. How I travelled by train, and then bus, to Whistler, British Columbia to spend the Thanksgiving 2019 holiday. It is also a rather humorous story of how I attempted, well mostly pretended, to be a snowboarder. What I realized is that Whistler is a cool place, being a snow bum is fun, the après happy hour is a great invention...but snowboarding is hard and falling really hurts! 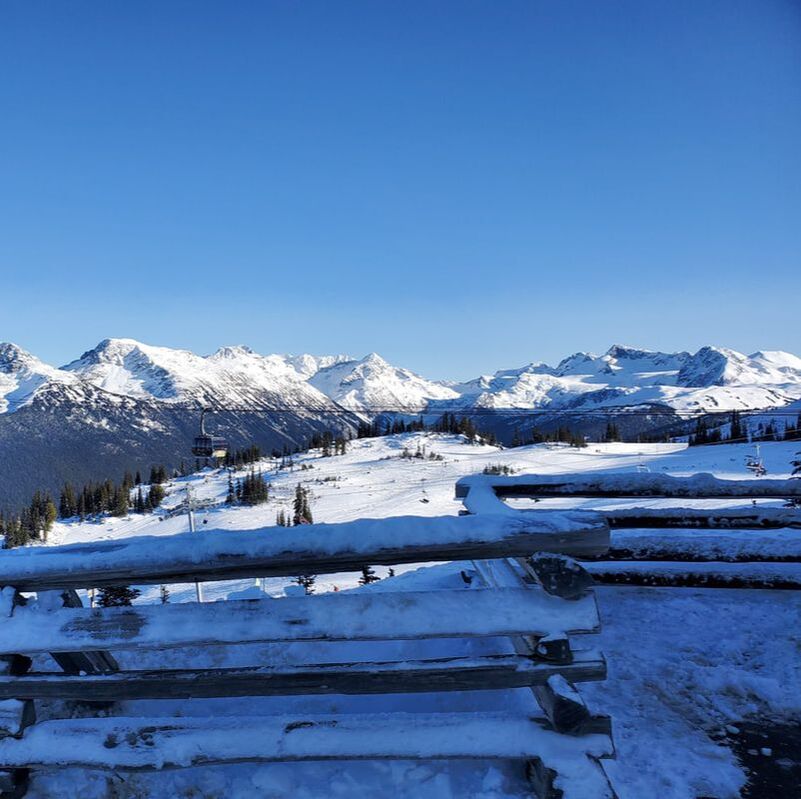 Not living near family to celebrate Thanksgiving gave me the opportunity to travel for the holiday weekend. But what restaurants and activities are open on Thanksgiving? Eh, yes, everything in Canada is open! About a month and a half prior to this trip I had visited Canada for the first time, driving across the border for a quick 24 hour trip to Vancouver, British Columbia. For my second Canadian trip I decided to take the train instead of driving. Amtrak operates the Cascades train route which runs from Eugene, Oregon to Vancouver, British Columbia. First, taking the train just sounded fun and scenic. I had not traveled by train in the US, but relied heavily on trains when backpacking around Europe in my early 20s. Second, I knew the vehicle border crossing would be extremely backed up with Thanksgiving holiday traffic. The train follows a slightly different border crossing process, so I figured it would be the most efficient route for holiday travel.
​Bright and early on Thanksgiving morning I caught the Cascades Amtrak from Seattle's King Street Train Station. The ride to Vancouver takes four hours as the train meanders along the Puget Sound coastline, through beautiful countryside, and makes stops at a couple other stations along the way. At the Canadian border crossing the train does not stop (like vehicles do), but continues directly to the Vancouver Pacific Central Station. Once disembarking at the train station all passengers go through Canadian customs, exactly as you would do at an airport. The checkpoint at the train station was efficient and quick since the volume of traffic was simply our one train of passengers. The four hour train ride to Vancouver is an hour longer than the typical drive. However, given unpredictable delays at the vehicle border crossing, driving could very well take you four or more hours as well. I highly recommend taking the train to avoid some of that stress - just sit back, relax, and enjoy the scenic ride.
​Arriving in Vancouver, I at least knew my way around the city from my trip the month before. I took the light rail (public transportation) into downtown to catch my next connection - the shuttle bus to Whistler. The drive from Vancouver to Whistler is about two hours north up the Sea to Sky Highway. Several companies operate shuttle services to transport tourists back and forth from the city to Whistler Village.  The highway is winding and gains elevation past several beautiful lakes and into the Canadian coastal mountain range.

Whistler Village is a quaint, resort area at the base of Whistler Mountain. I had rented an Airbnb in a condo building right in the heart of the village which made it easy to stroll through all the shops, restaurants, and then right out to the slopes. Whistler hosted many events during the 2010 Vancouver Winter Olympics and you can still see the landmarks around the village and on the mountain. Oh, did I mention it was COLD? During my entire visit the highs were only in the upper 20s. I stayed warm during the day when active, but it was absolutely freezing at night around the village. Definitely the coldest I have ever been.
The next morning, Friday, I was up early and heading to snowboard school! Growing up in the Southeastern US, snow (and snow sports) is not exactly something I have much experience with. As a pre-teen I had skied twice (on manufactured, icy snow) in West Virginia and North Carolina. Since I had the opportunity now, I figured I would give snowboarding a try. I knew it was ambitious...but hey, YOLO. The night before I had visited the Whistler Mountain snow shop and got myself set up with a weekend lift pass, a full day group snowboard lesson, and rented my snowboard, boots, and helmet. A few hundred dollars later...and I was now ready.
The instructor took our group up to the bunny slope where we spent the entire day learning the fundamentals. The technique was taught very methodically (movement 1, 2, 3, etc.) but I struggled to put it all together. It did not feel natural and attempting to remember all the steps was distracting to me. I fell a lot and falling definitely hurt. However, by the end of the day, I finally found "the feeling" and was able to put together a few complete runs down the bunny slope. Another factor contributing to the falling, and the pain of falling, was the snow conditions. You can see from the snow line in the pictures below that there was not much snow cover (it was opening weekend on Whistler Mountain). Most of the snow on the bunny slope was manufactured and icy, which made things slick for a beginner like myself. Of course falling on hard packed snow also felt like landing on a solid concrete sidewalk. All in all, I had a fun day on the mountain (well, bunny slope). I made it back down with my ego mostly in tact and a few good bruises.
The next day, Saturday, it was back to the bunny slope to try again - this time on my own. I practiced all day long, but never could find that illusive "feeling" again. Without the instructor there, my performance had clearly regressed! After two solid days of falling, things had started to become really painful. So, I called it quits on the actual snowboarding.

Since I had not made it off the bunny slope, I decided I needed to get some additional value out of my lift pass. I spent the remainder of the afternoon being what I will call a "pretend snowboarder" riding around on the Whistler lift system to check out other areas of the mountain. I stopped at the top of Whistler Mountain (elevation 7,156) for an après beer and enjoyed the views. If you are not familiar with the term après it literally means "after skiing" in French. In reality it means happy hour after skiing. Now that is a concept I can get behind (and I did on both evenings after the slopes). Luckily most of the Whistler lifts are enclosed, so I just carried my snowboard from one lift platform to another and eventually back to the base of the mountain. It was actually one of the most fun parts of the trip!
On the final morning, Sunday, I walked around Whistler Village, ate lunch, and then began the bus to train transportation process home to Seattle. Overall, it was a great Thanksgiving long weekend trip for new experiences. I enjoyed spending more time in Canada, checking out Whistler, and participating in the ski resort scene. It was fun to be outdoors on the mountain and in the snow. It is always challenging and humbling to learn a new skill and luckily I had no long lasting injuries from this snowboard attempt. I hope to one day return to Whistler during the summer months because I hear there is a lot of great hiking in the area.