I spent the last weekend in July enjoying big views and, well, alpine lakes.  For the short version of my trip, check out the Video Montage: A Weekend in the Alpine Lakes Wilderness to travel along with me by video.  For the full trip details, keep reading here!

The Alpine Lakes Wilderness is a designated wilderness area within the Okanogan-Wenatchee National Forest, roughly two hours east of Seattle.  Alpine lakes are specifically lakes that exist at higher elevations or above tree line in the alpine environment.  Alpine lakes are often glacier or snowfield fed, leading to their signature clear, blue water.  There are over 700 lakes across the glacier-carved terrain of this wilderness area, thus its appropriate naming: Alpine Lakes.

Last summer I took my first trip into the Alpine Lakes Wilderness, hiking through the Necklace Valley to Tank Lakes.  The scenery was spectacular and I quickly learned that the Alpine Lakes Wilderness does not disappoint!  I maintain a running backlog of hiking, backpacking, and scrambling locations that I pull from when brainstorming what trip I want to do next.  Mount Daniel and Jade Lake had made the list, just a couple valleys over from where I had hiked last summer, so I decided to head back into Alpine Lakes to check them out.  During the trip there was haze on the horizon from Washington and Oregon forest fires, which muted the Cascade Range views on the horizon.  Fortunately, there was no smoke in the area so the air quality was not impacted.  Thanks to the high snow pack this winter and an unseasonably warm summer, the mosquitos are quite abundant.  Mosquitos were a nuisance every day (in every location).  Permethrin treated clothing, plus the occasional use of a head net and picaridin bug spray, worked well to (mostly) keep the pests from biting me.

After about a two and a half hour drive out I-90 to the Cathedral Rock trail head, I headed out hiking late Friday morning.  The Cathedral Pass Trail starts out forested, but quickly gains ~2,000 feet of elevation up into the sub-alpine at Cathedral Pass.  Near Cathedral Pass the trail flattens and meanders along several unnamed lakes and tarns.  The first sight of the namesake Cathedral Rock appears and it would dominate my views for the next 24 hours.  Beyond Cathedral Pass I intersected with the Pacific Crest Trail (PCT) and headed southbound for a few short minutes.  A sign marked the Peggy's Pond Trail and I left the PCT for the rocky ridgeline walk up towards the pond.  Views of Deep Lake and the surrounding mountains fully came into view, giving me my first awe moments of the trip.
Once reaching Peggy's Pond, I took a short break and then started up the slope above the lake towards Mount Daniel.  The trail fades to a rougher boot path at this point.  As is typical with any boot path, there are many paths and they tend to disappear then reappear throughout the climb up the mountain.  Having GPS maps and navigation experience is helpful to keep on route, but there is no one perfect way up.  I headed along the southeast ridgeline of Mount Daniel, located the predominate boot path, and began climbing up into the alpine environment.
Continuing higher on the southeast ridgeline, the terrain got rockier and a few patches of snow lingered.  I was happy to find several seasonal water sources still flowing from the snow melt.  There was not nearly enough snow left to travel any distance across though.  The established boot path leads up the sandy terrain, so I continued to essentially walk up the steep slope.  The 360 views began to impress and I could now see down into the aqua colored Circle Lake and Deep Lake.
The Mount Daniel boot path leads directly over a high point on the ridge at ~7,000 feet.  I stopped on this perch, took in the views, and decided that I had gone far enough.  From that point forward, the path drops down into a saddle and steeply climbs ~900 more feet to reach the Mount Daniel summit.  It was a cool moment - I had the place to myself as far as the eye could see.  The 360 degree views of the Cascade Range surrounded me.  The huge massif of Mount Daniel loomed directly over me.  The glacial carved valleys and alpine lakes stretched out below me.  I sat down on some rocks to take in the moment for awhile.  I have to say, it does not get much better than that.
After enjoying my moment at ~7,000 feet, I decided it was time to start heading back down the mountain.  On the way up, I had noticed a beautiful stream through the meadow on the northwest side of Peggy's Pond.  It looked like a nice place to camp for the evening, so my plan was to go check it out.  Having a better idea of the route now, the trip back down the boot path went much more quickly than the trip up.
After reaching the valley above Peggy's Pond, I scouted the river bank for a suitable camp location.  Sure enough I found a wide, rock free spot on the bank a few hundred feet upstream.  It was an excellent location to set up camp under the shadow of Cathedral Rock and by a crystal clear stream from Mount Daniel glacier runoff.  This summer I have only been bringing my bivy sack as a shelter, making camp set up quick and easy.  The last thing on my agenda for the day was to head a few hundred feet up to Peggy's Pond for a freezing cold dip into the lake before dinner.
That evening a few clouds rolled in and the sunset painted the sky with several different orange and yellow tones.  I finished the evening enjoying the alpenglow on Cathedral Rock and called it a night as soon as the last light faded from the valley.

​The next morning I packed up camp and retraced the prior day's route on the Peggy's Pond Trail to join back to the PCT.  Heading northbound this time, I spent all morning hiking up the PCT towards my next objective - Jade Lake.  There was noticeably more foot traffic on this section of trail, likely because it was the PCT and also now the weekend.  My pace was slowed a bit from stopping to talk to other hikers, navigating a large section of tree blowdowns (which a trail maintenance crew was clearing), and strategizing a very fast waterfall/stream crossing.  Shortly after lunchtime I made it to Deception Pass and paused for a quick snack break.  At the pass, the PCT intersects with a number of local trails and it was time for me to head west on the Marmot Lake Trail.
Not surprisingly, the Marmot Lake Trail delivers you to Marmot Lake.  While Marmot Lake is a pretty (and popular) alpine lake, the real prize of this area is Jade Lake.  Also, as the name suggests, Jade Lake is a truly aqua colored and glacial fed alpine lake tucked under steep peaks just to the north of Mount Daniel.  After hiking along the east bank of Marmot Lake, the trail ends and a rough boot path leads up the steep southern slope of the lake.  ​From there the route up to Jade Lake is a fairly straight forward boot path, marked with cairns, and only includes some light scrambling over rockfall.  After a steep climb, the boot path flattens out across a beautiful meadow and views of Jade Lake plus the surrounding peaks suddenly appear on skyline.
The scene at Jade Lake is breathtaking!  I have never seen such pure aqua colored water in person before.  Who knew my shirt would exactly match the color of the water!  The scale and the rawness of the peaks rising up from the lake gave me the feeling of truly being in an ancient, glacial carved world.  It is hard for pictures to do it justice.  I was reminded of a line from the song "Roundabout" by one of my old-time favorite bands, Yes: "In and around the lake; Mountains come out of the sky and they stand there".  Could not have said it any better to describe the feeling at Jade Lake.
After setting up camp on a knoll overlooking the lake, I headed out to do some pre-dinner exploration.  I followed a boot path up to a higher elevation that gave bird's eye views of Dip Top Gap, the length of the glacial snowfield, and of course, Jade Lake.  I sat for awhile to enjoy the perspective and listened the sound of the rushing snow melt streams below.  Definitely made for another cool moment to remember!
Next, I dropped down from the highpoint and into a delta area on the south side of the lake.  Here the streams from the glacier snowmelt feed into Jade Lake giving it that signature aqua color.  I rock hopped around the gravel and boulder filled delta area for an opposite perspective now looking up at Dip Top Gap and the length of the glacial snowfield.
As evening settled in on the lake I had a great view from my bivy perched up above it.  It had been cloudy all day, but the sky suddenly looked darker and I hoped it would not rain.  Just as I tried to go to sleep I felt the pitter patter of rain on my bivy.  Luckily the rain was light (and the bivy's waterproofness held up).

On the next morning I noticed that the haze had increased across the area, likely from the distant wildfires.  I retraced my route down from Jade Lake to Marmot Lake and back to Deception Pass via the Marmot Lake Trail.  From there I had a straight, downhill shot on the Deception Pass Trail back to the Cathedral Rock trail head.  Over this last stretch I enjoyed some pretty sublime valley walking by Hyas Lake.  The haze gave all of my photos a unique mood and seemed to amplify the reflections on the lakes.
View the below map with my actual route tracked via my GPS watch.  Day 1: Red, Day 2: Blue, and Day 3: Green. 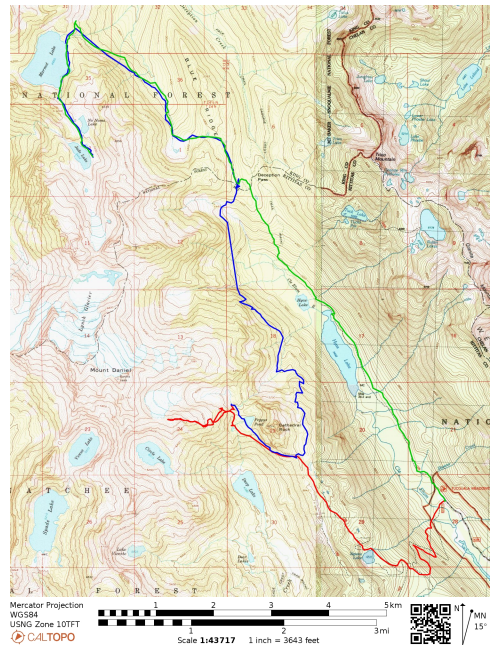