A Saturday spent exploring Spray Park, in the northwestern corner of Mount Rainier National Park, will certainly not disappoint.  After hearing about the area and reading multiple trip reports, I had intel for what seemed like a pretty cool route.  In the end, I saw some amazing scenery and spent the day off the beaten path in my own little slice of alpine paradise!  Highly recommend!

I started out my route on an unmaintained trail and then connected to a boot path along a ridge up to the base of the Flett Glacier at ~7,500 feet elevation.  I then explored both sides of the ridge across meadows, a few lingering snowfields, and every type of rock imaginable (seemed like it).  I found so many tarns, a couple of glacial fed lakes, and the last of the wildflowers blooming.  The clouds hung out all day, but made for interesting lighting and mood in all of my photographs.

I had never been in this northwest corner of Mount Rainier before.  Wow, it has a different vibe than the other more touristy areas of the park such as Paradise or Sunrise.  It felt more rugged, more pristine, and significantly less populated.  The terrain also seemed more varied (maybe because new to me), but it was really fun to spend the day exploring to see what I could find next!  View my blog post, On the Rocks, to see a slideshow of some of the most interesting varieties of rocks that I saw during my trip.

My outing started from Mowich Lake, a relatively short two hour drive from Seattle.  It is an easy drive except for the last 15 miles on the dirt Forest Service road.  Most visitors to the area will choose to access the well-known Spray Park Trail which leads directly up to a waterfall and beautiful meadow of wildflowers during the summer.  I chose to start out from Mowich Lake on the more adventurous and off the beaten path option - the unmaintained Knapsack Pass Trail.

The trail heads uphill, fairly steeply, starting in the forest and making its way above tree line to Knapsack Pass.  It was still early morning and the typical Pacific Northwest mist and fog hung tight in the valleys.  For an "unmaintained" trail this one was in good condition.  The trail was not overgrown, but hard to follow in a few places and required climbing over plenty of roots and rocks.  I got wet knocking the morning dew off all the bushes as I pushed through them along the path.
From the top of Knapsack Pass I saw a few specks of blue sky above.  I hoped a sign the clouds were clearing or that I was heading up above them.  I dropped down the other side of Knapsack Pass via short, rocky and scree-filled slope.  At the bottom the pass, I found myself in an alpine environment amidst a sea of rocks that spread out into beautiful meadows.  I did not have much visibility due to the clouds and I figured Mount Rainier was there somewhere behind them.  Not a minute later, the clouds started to part and Mount Rainer came out from behind the curtain.  I stood on top of a large flat rock, which provided a great vantage point, and soaked in the 360 degree views.  Mount Rainier appeared huge on the horizon and offered a great perspective for where I was heading later in the day.  It was an amazing next few minutes to watch the clouds move away and swirl around the surrounding mountain peaks.  But, almost as quickly as they had parted, the clouds returned and I continued on with my route.

The remainder of the Knapsack Pass Trail led me through a flat meadow until it intersected with the Spray Park Trail.  I headed out along the Spray Park Trail for just a few minutes before spotting the unmarked boot path up towards the Flett Glacier.  I was still in the middle of the clouds, but I could tell I was really climbing above them this time!  A couple hundred feet further and the views opened up to show Mount Rainier above me and the surrounding alpine meadows of Spray Park below me.  The cloud cover hung tight all day in the valleys, around 6,500 feet elevation and below.  As long as I stayed above that elevation I had clear views, but anytime I got down near 6,500 feet the white out began to engulf me again.
As I climbed higher on the ridgeline the views became more and more impressive.  Mount Rainer, with the Flett Glacier running down from it, dominated the skyline in front of me.  The mountain was framed by Echo Rock (left) and Observation Rock (right).  There was an aqua lake to the right of the ridgeline, fed by runoff from the Flett Glacier.  I took plenty of pauses for photos and gawked at the views the entire way up the ridge.

Base of the Flett Glacier

After a beautiful climb up the ridgeline I reached the base of the snow-covered Flett Glacier.  From my viewpoint, the left side of the glacier clearly had developed small crevasses.  I could see and hear the water flowing through the cracks that had opened up.  I climbed up a small hill to gain a different view point and, to my excitement, noticed a tarn that formed at the base of the glacier below.  Of course I had to go check it out!  I sat on a large rock by the tarn and took a short break to enjoy the views.  I had to pinch myself that I was sitting by an aqua-colored tarn, at the base of a glacier, and looking up to Mount Rainier above.  Also, from this vantage point, I could tell that the next valley (east of the ridge I had hiked up) was now easily accessible, so I continued on hiking past the tarn.

Looking down into the next valley I saw several more tarns and the terrain looked extremely rocky as compared to the meadows on the other side of the ridge from my way up.  I picked out a particular tarn that I wanted to navigate towards and traveled down few lingering snowfields and a lot of rocks to head in that direction.  I have never seen more diverse, interesting types of rocks within such a short distance of each other!  Also, in the middle of nowhere, I picked up an old balloon.  Makes you wonder where it traveled from, how long it had been there, and whose special occasion it was for.  As I dropped lower into the valley the clouds returned and I decided it was time to circle back towards the Flett Glacier boot path where I had started from.

Once joining back to the Flett Glacier boot path, I decided to check out the other side of the ridgeline on my way back to the car at Mowich Lake.  This side of the ridge features the well-known Spray Park meadows and was much easier travel than the other, rocky side!  Walking through the meadow and past a few more tarns, I descended below the 6,500 elevation mark and into the cloud cover for good this time.  A few remaining wildflowers lingered in the meadows, but mostly they were past prime and/or gone now.  I connected back to the Spray Park Trail for a long, downhill walk through the forest back to Mowich Lake.
View the below map with my actual route tracked via my GPS watch.  My start/end point is the southwest corner of Mowich Lake. 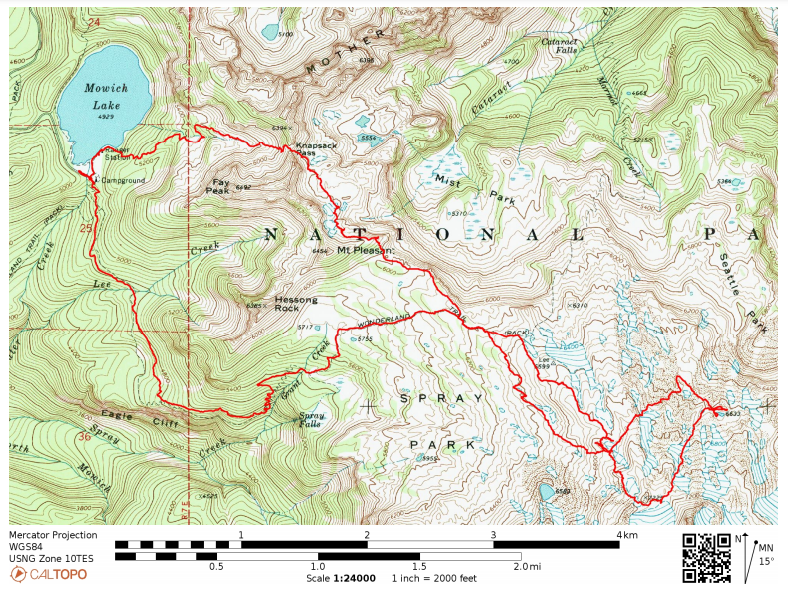