Fresh off my five day Yosemite National Park backpacking trip, I headed up to the North Cascades National Park the very next weekend.  I could not wait to get back out there for a two day, one night weekend.  I had learned so much during my Yosemite adventure and had already dedicated myself to test (and keep practicing) my backpacking skills over the remainder of the summer.  And yes, I'm spoiled living in Washington with three national parks within a few hours drive in any direction.

In researching Washington backpacking routes, I ran across an interesting ridge in the North Cascades called Rainbow Ridge.  The ridge is relatively flat, wide and easily accessible off the trail.  But the catch is that there is no trail across the ridge itself.  Sounded like the perfect opportunity to hike some miles on trail, but explore the ridge to gain low risk, off-trail navigation practice.

To backpack out to Rainbow Ridge I started at the Bridge Creek Trailhead off Highway 20 in the North Cascades National Park.  The Bridge Creek Trailhead is just south of Rainy Pass, a popular hiking area and where the Pacific Crest Trail (PCT) crosses over the highway.  Being a prime summer Saturday, the trailhead parking lot was packed and cars were lining down the road (less than ideal).  After waiting around for a few minutes, I lucked up with a spot in the parking lot and off I went!  From the trailhead I started out hiking south on the PCT.  After a couple miles I hit a junction with several North Cascades park trails and a beautiful stream to fill up on water.  After that, I left the PCT behind and followed the McAlister Lake Trail the remainder of the way towards Rainbow Ridge.
Most of hike out McAlister Lake Trail is forested with a few meadows and peek-a-boo mountain views.  One difficulty during this part of the hike was the number of downed trees to climb over, under, and around.  Seriously, it felt like every half mile I was navigating something.  My speculation is that due to COVID-19 trail crews probably hadn't been out in 2020 to work on this lesser populated park trail.  The other entertainment was several stream crossings which were still running high enough to require careful foot placement across the rocks.  On the way out Saturday I managed to get across these without getting wet.  But on the way back Sunday I slipped and soaked almost my entire lower body.  Oh well, at least it was refreshing!
By early afternoon I had reached McAlister Lake, the namesake of the trail.  The lake turned out to be a stagnant mosquito breeding ground, but I threw on my head net (and was prepared with permethrin treated clothes) and sat down for my lunch break.  Leaving the lake I headed up the trail to McAlister Pass which tops out around 6,000 feet.  The pass opens up into a pretty meadow with plenty of pika and mosquitos to keep me company.  If you are not familiar with pika, check out the linked Wikipedia page.
On the south end of McAlister pass, before the trail begins to descend again, I began looking for my access point to Rainbow Ridge.  Hiking website beta had described it as a grassy ramp to access the ridge from the trail.  I used Gaia GPS on my phone as well as my paper maps and compass to practice taking my bearings and confirm direction.  From the land it was pretty obvious and soon enough I was heading up the ridge.  After a few minutes I found a game trail to hike along.  Sometimes the trail was very obvious, other times it took a little searching, but it would always reappear eventually.  As I hiked out the ridge, beautiful views opened up to the south overlooking part of the Cascade Range.  Luckily the mosquitos died down too, thanks to the wind on the ridge.
After about 2 miles on the ridge I arrived at an unnamed lake set deep in a cirque (bowl shape) cut into the mountain side.  The ridge was pretty exposed, so I searched awhile for a protected camp area to pitch my tent.  I finally located a spot elevated from the lake but tucked behind the bank of a hill with some trees for protection and a talus slope at my front door.
I sat out on the ridge to eat dinner, watch the sun set, and later in the night even saw a beautiful moon.  On the next day, Sunday, I hiked back out to my car by retracing my steps on the same route.  I was really surprised by how few people where out in this area of the park.  I saw numerous people on the PCT both days, but outside of that I think I saw only 3 others in 24 hours.  The Rainbow Ridge portion of this backpacking trip did not disappoint!  Beautiful views, easy/safe navigation practice, and total serenity.  The PCT section and McAlister Lake Trail, which I used to access Rainbow Ridge, were both pretty (but fairly mundane for the North Cascades).  After all, the trail was purely a means to get to the end of the rainbow - well Rainbow Ridge that is. 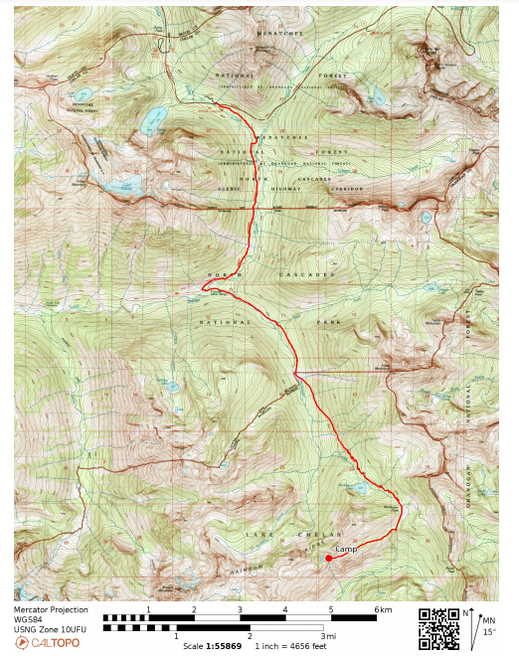