Last summer, when I was driving back from California after my Yosemite National Park backpacking trip, I stopped and spent the night in Bend, Oregon.  That was my first visit to Bend, which I would describe as a chill, outdoor lovers place.  It is situated on the Deschutes River in Central Oregon with the Cascade Range to the west and the desert to the east.  Oh, did I mention the breweries!  I've heard Bend compared to Asheville, NC (for any of you East Coast friends).  But, nah, Asheville is still tops in my book.

​While drinking a beer in Bend that night last summer, I struck up a conversation with some folks and they gave the recommendation to go hiking in Smith Rock State Park.  I'd never heard of it, but the pictures looked beautiful so I marked it on the map for a future visit.  And that seed planted became the inspiration for my trip this March!  Whenever I learn of interesting hiking or travel locations I always mark them on the map for research later.  Over the last year I've wanted to go back to Smith Rock and I'd also collected several other recommended hiking locations around Bend.  I set my sights on the eastern side of Bend which is relatively low elevation and a dry grassland or dessert-like environment.  Importantly, this area is fully accessible during late winter months when the Cascades are still fully loaded with snow.

The last weekend in March I decided to make the trip down to Central Oregon to hit four different hiking locations around Bend over a 3 day long weekend.  My plan was to live and sleep out of my SUV "road trip vehicle" while exploring around Central Oregon.  To park my vehicle for the evening I choose to take advantage of dispersed camping, which means to camp on public lands outside of established campsites.  End result: Success!  Check out my related blog post 3 Days of SUV Living and Dispersed Camping in Central Oregon to read more about dispersed camping and the details of my vehicle DIY road trip and sleep system set up. 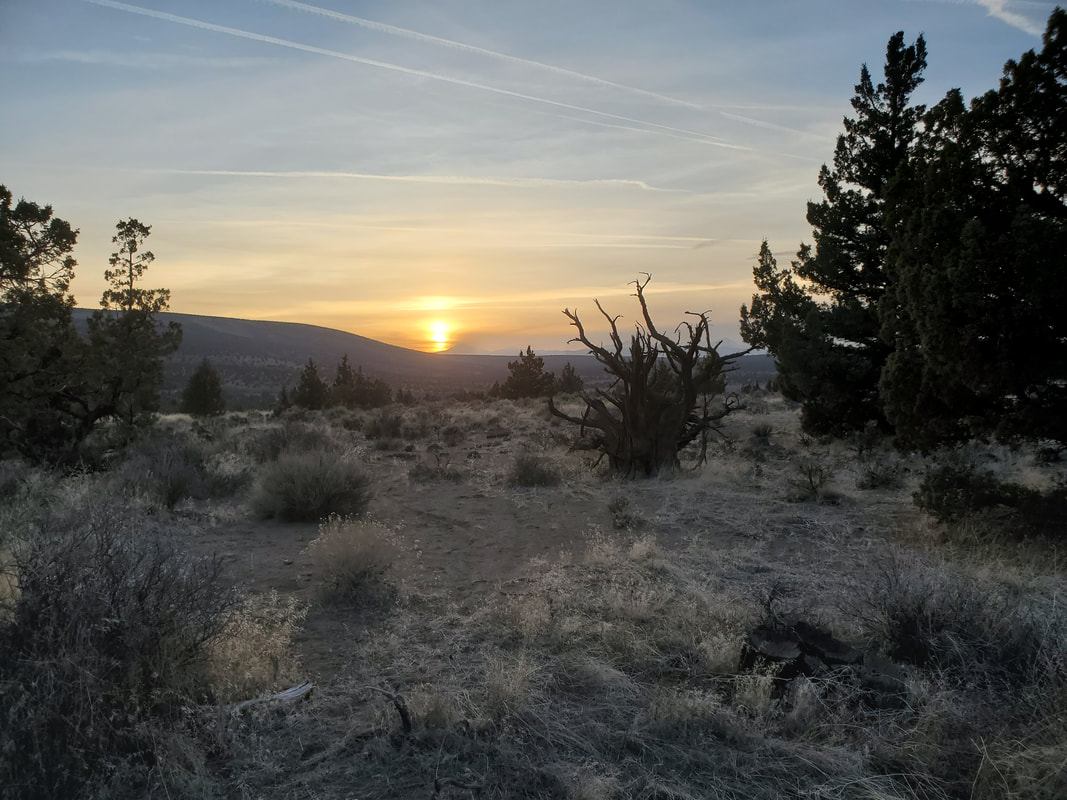 Early afternoon on Friday I unplugged from work and headed down to Central Oregon.  I arrived at my first night dispersed camping location, Crooked River National Grassland in the Ochoco National Forest, just as the sun was setting.  Being a Friday night, this Forest Service road was pretty packed with groups camping at most of the pre-established pull outs.  I kept driving toward a higher elevation spot on the map, hoping for a sunset view and fewer nearby parties.  I lucked out with both!  I enjoyed the fading sunset, total solitude, and the last views of Mount Hood on the horizon before getting comfortable in my car camping set up for the night.  Not a bad view to wake up to in the morning either!
Crooked River National Grassland

On the next morning, Saturday, my plan was to head straight to Smith Rock State Park to spend the day.  I was pretty slow moving out of camp (blame it on the great views) and I arrived at the park at 10:30AM - but no parking spots to be found!  Smith Rock is incredibly popular and I should have known it would be packed well before late morning on a Saturday.  After circling for a parking lot for a long while, I decided I'd have to resort to Plan B... The Oregon Badlands Wilderness.
Oregon Badlands Wilderness Area
The Oregon Badlands Wilderness, is only 20 minutes east of Bend but it feels much more remote.  This area is a high desert environment originally formed by volcanic activity and lava flows.  Despite being mid-60s when I passed though Bend, it felt really dry and much hotter out in the Badlands.  The landscape is flat except for the occasional volcanic rock protruding out from the earth.  It is really hard to wrap your mind around all the geology - especially with volcanic activity millions and millions of years I ago.  I spent the afternoon hiking through the unique landscape and climbed up to Badlands Rock (one such protrusion of volcanic rock).  I followed directions to the dispersed camping area, up a Bureau of Land Management dirt road on a bluff overlooking the wilderness area.  There were far fewer groups at this location and I had pretty much the pick of any view I wanted.  Got another beautiful sunset!

On Sunday I knew what I had to do - wake up early and get that parking spot at Smith Rock!  I pretty much woke up, jumped in the driver's seat, and headed out.  I arrived right at 9AM and got prime parking on this second attempt.   See I'd figured it out on the prior day - everyone gets there early, sets up, eats breakfast, gets their gear ready, cleans up the car camping set up, hangs out...and eventually goes out hiking and climbing.  Kind of like tailgating for a football game!  I definitely got dressed, brushed my teeth, cleaned up my car, packed my gear, etc. in the parking lot that morning (along with most everyone else)!
Smith Rock State Park
Tourists, hikers, and especially climbers head to Smith Rock for interesting rock formations, a beautiful river gorge, and 360 views of neighboring farmland and the Cascade Range.  And wow, it did not disappoint.  I struck out on the Misery Ridge Trail, aptly named for about 1,300 feet of vertical elevation gain in just a mile.  After gaining elevation, the trail follows the ridge across the park for sweeping views.  I stopped for awhile at Monkey Face rock to watch two climbers ascending the final two pitches to the top.  Super cool to watch and the rock really does look like a monkey!  The climbing at Smith Rock is supposedly world class and attracts climbers from all over.  After descending down Misery Ridge I took another trail further out into the park and surprising left most of the people behind. Smith Rock is a small park and highly visited, but most people seem to stick to the core trails or climbing spots.   I stopped for lunch on a beautiful hillside over the river valley and had the place to myself.   Then I followed an unmapped climbers route for a few "off the beaten path" views that led me on some light scrambling and eventually connected me back to the main trail.  All fun.  Like a lot of the landscape in WA and OR, the Smith Rock area is volcanic rock formed through the combination of various past volcanic incidents.  It was a clear day and on top of the Smith Rock ridge and I could see 10 volcanoes on the horizon!  If you are ever in the area - put Smith Rock on your to-do list! ​
Painted Hills Unit, John Day National Monument and Surrounding Area
As if Smith Rock wasn't enough for one day, I still had one more adventure in me!  Way out in north central Oregon you can find the Painted Hills, a designated National Monument.   This area is about 2 hours from Bend and feels very remote, but so incredibly beautiful.  The color stripes in the soil were created by changing climates in the area over time.  The red soil was predominant in a past warm/wet environment.  Yellow and tan soil indicates a drier time period which persists today.  I explored around some of the land nearby to Painted Hills and ran into a section of free range cattle.  Being springtime, there were a bunch of cute little calves too.  They didn't seem to mind me!  After checking out the Painted Hills area I headed back towards Bend and decided to set up for the evening in the Crooked River National Grassland, the same dispersed camping area as the first night of the trip.
On the next morning, Monday, I took my time around the Grassland area before eventually heading back towards Seattle around mid-morning.  Overall, I had great weather, the car camping set up was a success, I did a few interesting hikes, and I saw some amazing scenery.  Doesn't get much better than that for a roughing it, nature escape weekend!​